Disclaimer: I received an entry into the Air Force Marathon as part of being a BibRave Pro. Learn more about becoming a BibRave Pro (ambassador), and check out BibRave.com to find and write race reviews!

As someone who grew up in the Miami Valley region of Ohio, Dayton was the first real CITY that I experienced. This experience largely consisted of shopping trips with family, holiday parades with my high school marching band, and grade school trips to the National Museum of the United States Air Force – which I’ll refer to as the Air Force Museum from here on out. After grade school, my most recent trip to the Air Force Museum was 2010 (wow!) with my then-girlfriend (now, wife) Tammi. I’ve always loved aircraft and the Air Force Museum will always be a fun place to go for me and my family.

With that said, I’ve known about the Air Force Marathon for a while, but have never run in any of the events. It runs around Wright Patterson Air Force Base as well as through the campus of Wright State University – again, two areas you can’t really avoid if you visit that portion of Dayton! As a BibRave Pro, I was given the opportunity to participate this year – even if it was doing so in a virtual way – so I couldn’t pass it up!

But…I didn’t sign up for ONE distance. I signed up for THREE as part of the #FlyFightWin Challenge Series!

How did it work?

With the various restrictions and protocol in place as a result of the COVID-19 pandemic, the organizers of the Air Force Marathon still moved forward with the event – but did so virtually. This means that participants still get all of the experience of participating in the event, but they run the distance(s) wherever and whenever they choose.

Participants could start logging their respective event as early as September 1. For reference, the original date for race weekend was to have been September 18-19, 2020. (Sidenote: September 18 is the birthday of the United States Air Force!)

The race organizers did a great job of communicating leading up to “race month” and keeping participants engaged via their fantastic social media presence. There was a virtual race experience set-up for all participants – complete with a virtual expo, live stream on race day, link to a national anthem performance (because this is a sporting event after all!), and – of course – a page to upload results. Participants could see almost immediately how they stacked up against each other!

Unfortunately, this recap will not include a photo with my medals because we haven’t received them yet. However, we expect the SWAG to be shipped out in early October – so I’ll do a follow-up post upon receipt! 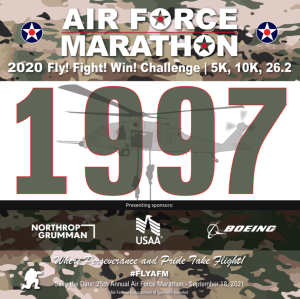 I signed up for the Fly! Fight! Win! Full Marathon Challenge Series of events. This meant I was scheduled to run:

I would run each as a stand alone event and since I wanted to try and keep things as “normal” as I could, I decided to run all three events on the original scheduled weekend.

Here’s my break down of the three events:

After I got the wife and daughter off to school / daycare, I rushed inside and got ready for my morning run before work. Decided in the moment that this would be my first of the three runs. It was a BEAUTIFUL morning for a run around the neighborhood. First mile was a little faster than anticipated, but it felt damn good – so I just kept pushing! 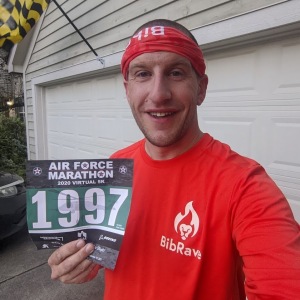 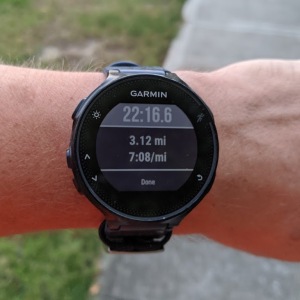 After a very hectic and somewhat stressful day at work, a good run was definitely the solution! Once again, Mother Nature did not disappoint. I headed out to Scioto Grove Metro Park – our local park – to get my 10k done on the various paths and trails. Most of this particular run was actually on TRAIL (read: dirt and/or grass), so to have a result that was within just a few minutes of my personal record was really impressive! 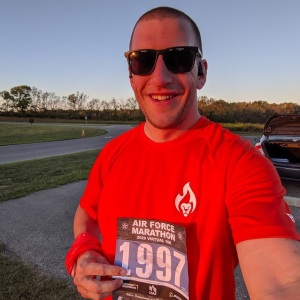 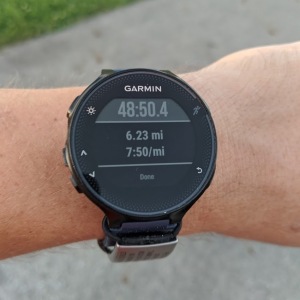 And along came the BIG one – the full 26.2 miler. On the plus side, the weather could not have been any better. Mid-60’s, not a cloud in the sky, and a light breeze. I chose to run my full marathon on the Olentangy Trail, running a 13.1 mile south to north out-and-back course. My course took me past the new Columbus Crew stadium site, Ohio State University, as well as multiple parks and river crossings.

Unfortunately, the beautiful day and course were where the good of this run ended. I felt pretty decent through the first 6 miles, but shortly after I began to feel more fatigued than normal on a longer run like this. Pretty soon after, I found myself walking as my body simply decided that running wasn’t the best option. I tried a little run/jog/walk combo to get me to the halfway point, which wasn’t the most enjoyable. I took a break at the halfway point and grabbed a quick bite to eat – who gets to do THAT during a normal full marathon?! – and then started the long trip back to the car. This was a long trip because I walked nearly every step of that 13.1 mile return trip. Not exactly my ideal marathon experience, but very thankful I listened to my body as it was definitely the RIGHT call. On the plus side, slowing down allowed me to really take in so much along the trail – I even saw 5 deer at various points and one of them was within 6 feet of the trail (and me) at one point!

First, why post pictures with the race “bibs”? In lieu of medals, I opted to not run with the bib on and treat them as my reward upon completion. I felt more comfortable showing off the bib once I knew the distances were complete!

Secondly, I had done a virtual run earlier this summer, but this was a whole different beast. My advice – treat a virtual the same as an in-person event in regard to your training. Don’t fall off the training plan or things will definitely go upside-down and you’ll find yourself calling audibles you weren’t planning for.

Finally, this really was a great experience from top to bottom. The race organization was spot on, communication was excellent, and – even though I ran around MY home base – I still felt like I was part of the Air Force Marathon experience as if it were in Dayton.

I definitely have September 18, 2021 marked on my calendar and hope to run the Air Force Marathon in-person next year. Hope to see YOU there as well!